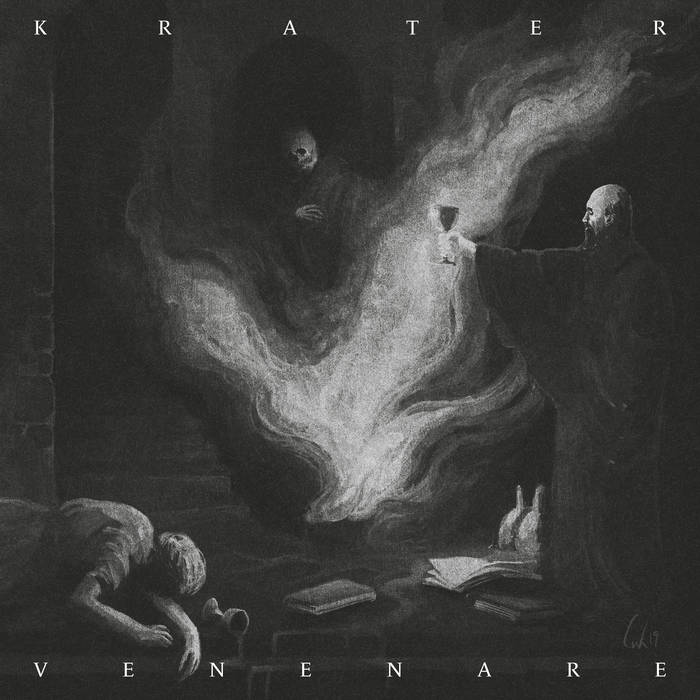 bcb723 This is a glorious black mirror staring back at you. The coolest part are the vocals which move between blackened screams and unholy singing, giving the album a gothic cathedral sense of scale. Inspirational phrase: "Let me carry you to the horizon/Here I hand you to the wind." Heavy and utterly demonic. Favorite track: Stellar Sparks.

Holdeneye A beautifully vicious display of nihilism, Venenare taps into everything that's great about black metal and should catapult Krater into the genre's vanguard.

A 50-minute work broken into nine songs but unified as one winding, widescreen composition, Venenare shows KRATER at the height of their all-too-considerable powers, a blinding and windswept vortex of sumptuous songcraft and passionate execution. Motifs slice and dice, blast and race with a grace that's simply stunning, as melodic counterplay runs riot with a proud 'n' powerful assertion of classic metal sensibility. KRATER's contours here undeniably exude a sleek and urban quality, but with abstracted hints of their pagan past subtly woven in to the soundfield, the result is staunchly second-wave black metal bravely recast for the 21st century. Venenare is thus timeless, yet forward-thinking all the same.

Venenare was created between 2016 and 2017 and recorded from April to September 2018. Re-amping, analog Mix and Master by Greg Chandler at Priory recording studios, UK (www.prioryrecordingstudios.co.uk)
Cover and illustrations by Misanthropic-Art (misanthropic-art.com)
Layout by Valkenstijn

Since 2004 KRATER released 2 demos, splits and 4 albums but it wasn't before their 2nd album “NOCEBO” until the band achieved wider success in magazines and high regard from the media, something the band was able to grow with the follow-up album 'URERE' from 2016. The latest album 'VENENARE' sees the band to once again display their vicious power and rigorous melody wrapped in their own dark mold. ... more

Bandcamp Daily  your guide to the world of Bandcamp